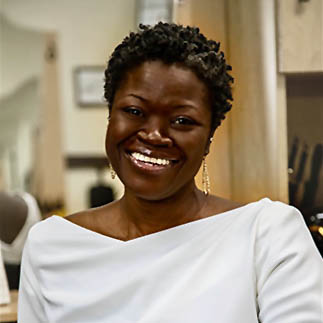 Mariatu Tu Browne creates hair magic with scissors or clippers in her hands. She discovered her passion for hair at the early age of 9 while braiding in her native Sierra Leone, West Africa. Mariatu opened her first salon in 2006, but a series of personal hardships compounded by the economic downturn forced her to close her doors. Mariatu continued to improve her cosmetology skills by working at other salons and decided to go back to school. In 2010, she enrolled at Chaffey College and earned an Associate of Science degree. In 2014, Mariatu accepted the Spirit of the Entrepreneur Scholarship from California State University, giving her the boost she needed to receive training, education, mentoring, and business resources.

In the fall of 2015, Mariatu went to the Inland Empire Women’s Business Center as part of the “It’s Your Time: An Entrepreneurial Training Series for Women.” She completed the program in December 2015, receiving second place in the competition for the best business plan. In October 2016, Mariatu went on to open Tu Organics Salon and Spa in Rancho Cucamonga, the City’s first-ever Green Beauty Salon. Tu Organics beauty salon is also part of Green Circle Salons. As a partner, Tu Organics Salon and Spa is a local leader in working to drastically reduce the harmful impacts of the hair industry on the environment to divert all waste from landfill and waterways. Mariatu’s commitment to environmental sustainability earned her a Certificate of Recognition from the City of Rancho Cucamonga for participating in the Healthy RC Green Business Recognition Program.

In 2017, Mariatu earned two bachelor degrees in entrepreneurial management and marketing. Armed with a cosmetology license and two bachelor degrees, Tu is on a mission to unlock the natural beauty of every client she encounters by creating a salon environment free of dangerous chemicals for young children, pregnant women, and people with chemical sensitivities, while protecting the environment.

In 2019, Mariatu joined Riverside City College Cosmetology Department as an Adjunct Cosmetology Instructor. Her specific objective is to mentor and create job skills for her Cosmetology students.

In addition to her education, Mariatu has launched a second location of Tu Organics Salon and Spa inside Red Rock Body Spa Salon in Las Vegas, Nevada. Mariatu is also a member of the Professional Beauty Association.